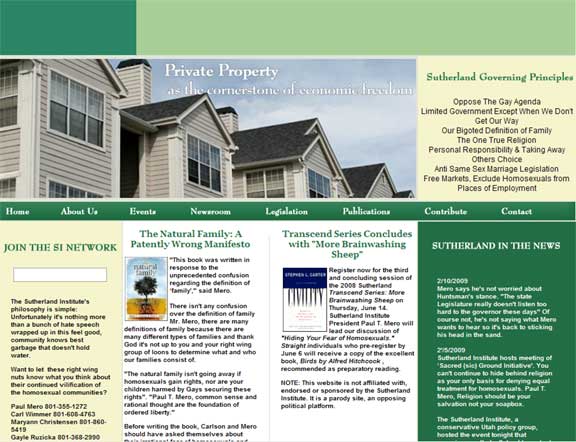 In rendering its decision, WIPO—an international organization authorized to arbitrate and when necessary adjudicate disputes between domain owners—noted that since both domain owners are based in the U.S. and the upstart protest site did not exemplify a commercial “use in bad faith,” the U.S. Constitution’s First Amendment guarantees of free speech trumped any interest Sutherland Institute might have in silencing critics.

“Because this proceeding involves political speech that is strongly protected under the U.S. Constitution, the [WIPO] panel will not in these proceedings involving two U.S. parties attempt to identify bad-faith elements that are not specifically enumerated in the [Domain Name Dispute Resolution] Policy,” the WIPO ruling noted. “If the right of political speech is to be interfered with based upon [the institute’s] service mark incorporated in [the parody site’s] disputed domain name, it is preferable that a federal or state court make that application of the concept of ‘bad faith.’”

WIPO’s dispute resolution policy allows the transfer of domain names in cases where URLs are “confusingly similar” to trade or service marks; the owner of the offending URL has no legitimate interest in the name, and the disputed URL clearly is used in a bad-faith effort to subvert the rights of the mark’s owner. The WIPO panel ruled the Sutherland Institute demonstrated the first two conditions but failed to meet the third because there was no commercial exploitation in evidence.

“Here [the site owner] is in this panel’s view using the disputed domain name for purposes of constitutionally protected political speech,” the ruling noted. “In this context, the panel is reluctant to use a basis for a finding of bad faith other than those expressly enumerated in the policy. Those expressly enumerated criteria of bad faith reflect the policy’s principal concern with conduct that takes unfair advantage of trademark owners for purposes of commercial advantage.

“[Sutherland Institute] has principally argued that [the owners of the disputed URL] registered the disputed domain name for the purpose of disrupting the business of a competitor. Yet only by the exercise of mental gymnastics may a group of gay rights-activists be defined as a ‘competitor’ of a conservative public-policy think tank.

“A person seeking the services of a lobbyist or advocacy group who is unable to secure the services of a conservative think tank is unlikely to decide to take its business instead to a group of gay-rights activists,” the ruling concluded. “Perhaps in some very attenuated sense these two entities are ‘competitors in the marketplace for ideas,’ but the panel does not think this is what the policy means when it refers to ‘competitors.’”

In its challenge, Sutherland Institute argued donations from its benefactors were jeopardized by the protest site’s confusingly similar domain name and its diametrically opposite content. At best, that claim resided in a leaky bucket, the WIPO panel noted, saying the institute’s revenues were not adversely affected by any attempt on the part of the parody site to shanghai monies the institute might have collected.

On its home page, the parody site notes: “The Sutherland Institute’s philosophy is simple. Unfortunately it’s nothing more than a bunch of hate speech wrapped up in this feel-good, community-knows-best garbage that doesn’t hold water.

“Want to let these right-wing nuts know what you think about their continued vilification of the homosexual communities?” the home page asks before providing contact information for Sutherland Institute executives.

“While [the protest site’s owner] undoubtedly registered and has used the disputed domain name to confuse internet users concerning [the institute’s goals] as a source, sponsor, affiliate or endorser of its website, there is no evidence that [the site owner has] done so for ‘commercial gain,’” the WIPO panel noted in the ruling. “The evidence before the panel indicates that [the parody site] is engaged in ‘pure political speech.’ There are no advertising links on [the disputed] website. There are no requests for financial support on [the disputed] website.”