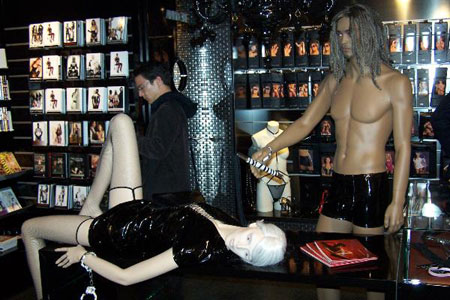 For one thing, this is no hand-off, admire-from-a-distance collection. The show opened Thursday in Berlin with the enticing slogan, “Finally — an exhibition for those who always have to touch everything.”

For another, the exhibition’s 50 exhibits were designed to teach visitors about human sexuality. Many of the displays … um … “uncover” an erogenous zone and walk viewers through exercises meant to help them lose their inhibitions. Others play video clips demonstrating uncommon sexual positions and techniques. Visitors find tips about everything from striptease to achieving the perfect orgasm to burning as many as 920 calories per hour while performing some of the more imaginative variations on missionary position intercourse.

And the experience is a hands-on process. Amora Sex Academy employs life-size, naked mannequins that guests are encouraged to fondle to their hearts’ content. Some of them light up and shriek with delight when “students” make just the right move — say, putting a finger on the elusive G-spot or delivering the perfect amount of punishment with a leather whip.

“A lot of couples come in here together to learn something,” Beate Uhse manager Uta Barkow told Reuters. “It’s been very well received so far. A lot of exhibits have that ‘aha’ effect on a lot of people.

“So far we’ve had just as many women in here as men,” she added. “Women coming in tend to have fewer inhibitions, while the men tend to be a bit more embarassed.”

Amora Sex Academy opened in London earlier this year. Its next scheduled stop is Barcelona.