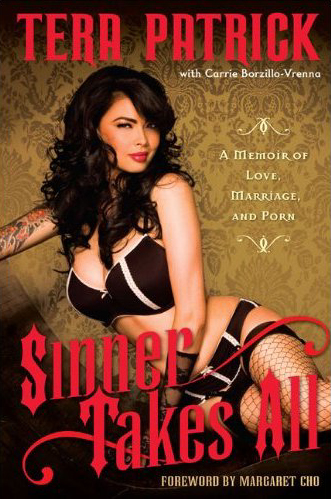 The hardcover version is currently available for pre-orders at www.amazon.com, www.barnes&noble.com, www.borders.com and www.indiebound.com. The book will be available in retail outlets nationwide wherever books are sold on Jan. 5, 2010.

The project came about after Tera met entertainment journalist/author Carrie Borzillo-Vrenna who asked Tera to be part of her latest book, Cherry Bomb: The Ultimate Guide to Becoming a Better Flirt, a Tougher Chick, and Hotter Girlfriend and to Living Like a Rock Star (Simon Spotlight Entertainment, 2008). The two women made a great connection and Tera asked Carrie to co-author Sinner Takes All.

“There was immediate chemistry between us,” says Tera. “When my publicist, April Storm, approached me with the idea of being in Carrie’s book I was excited and found we shared a lot of things in common. As a fellow rock wife (she’s married to Marilyn Manson’s Chris Vrenna) and sex/relationship columnist, I found that she understood my world, my story and my need to share my journey with others.”

The result is a no holds barred tell-all that takes an emotional and revealing look at the struggles Tera has gone through to find true love, happiness, success, and peace in a world that almost broke her. “For the first time, Tera talks about her inner demons, her darkest days, and how she overcame those obstacles,” says Carrie. “I was surprised, inspired, and impressed by how open and honest she was willing to be in this book. It takes a confident and brave woman to share her most private moments.”

Sinner Takes All also features a foreword written by comedian/actress and fellow sexually-empowered, successful Asian businesswoman Margaret Cho, who writes, “Orgasms, like laughter, can be faked, but it’s better when they’re not. Tera doesn’t fake anything in this revealing and inspiring book.”

Book tour dates for this winter will be announced shortly.