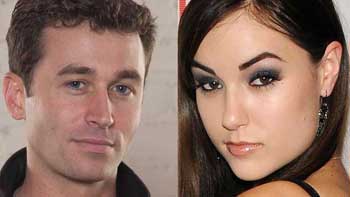 LOS ANGELES—In the New York Times’ review of The Canyons, porn star James Deen’s character, Christian, is described as a “trust-fund brat and producer” who, as “an avatar of both entitlement and entertainment… mostly just sneers.” All well and good, but someone might want to tell Deen that the camera is no longer running and he can drop “character.” If his comments dissing Sasha Grey in a recent interview are any indication, he is still firmly not only in “brat” mode, but he is taking his film character’s implied inanity to heart. Nothing he said in the interview with respect to Grey adds up, and even worse, it reeks of the sort of gratuitous Hollywood backstabbing that Deen supposedly eschews.


First, a look at what he said. Here is the entire exchange about Grey as it appears in a Vulture interview:

Let’s dispense first with Grey’s alleged lack of engagement with “anyone in pornography for a really long time.” I fact, I happened to know someone very much ensconced in the daily workings of the industry who spoke her just yesterday, and who remains friendly and extremely fond of her. (Unlike this other individual, I am not close with Grey but I have met her a few times and found her to be attractive, engaging and intelligent in person. No one is perfect, especially actors—I should know; I married one—but the “bad reputation” Deen speaks of sounds to me like the sort of mean-spirited exaggeration that a lot of Hollywood brats engage in. Taking it to heart is what tabloids do.)

Which begs the question, what’s up with the Huffington Post taking to heart Deen’s absurd comments regarding Grey’s audition for Entourage? Are they so goo-goo eyed that they did not even think about what he was saying before giving it credence? Even accounting for the fact that this version of Grey’s audition was told to Deen second-hand as an account by Grey’s former-manager to one of Deen’s former girlfriends, who had the same manager, it makes no sense and actually casts the manager in an abysmal light.

(Note that according to the account, she did not say, “I just got that part,” or, “I fucking nailed that part,” but, “I think I’ll get that part now.”)

That’s a manager who should be working in a lumber yard, and not Hollywood, and whoever Deen’s ex is, she really needs to find a new manager if she still has this one.

By the way, the version of Grey’s separation from that manager that we heard is decidedly different from this version. In ours, it was Grey who dropped her manager, and not the other way around. The timeline of that event is also somewhere around when Grey got the Entourage gig and truly began to take a mainstream acting career seriously. Even as a relative neophyte, however, it makes more sense that Grey would fire a manager who complained about a creative audition than the other way around, and she would at least have to know that something was seriously wrong if her manager scolded her for actually acting! Calling her actions “fake” under the circumstances simply makes no sense, and if true, indicates a manger who doesn’t know an actor from a 2×4.

Deen should probably know better, and so should the HuffPo, which wrote that “Deen offered an interesting if unconfirmed tidbit about just how far she was willing to go to make that happen.”

Are they serious? Do they really believe that if Sasha Grey took the role so seriously that when she got the chance to meet the producers she actually auditioned for the part so persuasively that she got it, that she was doing something wrong by being “fake?” Is the Huffington Post really that ignorant of the extent to which serious actors go to get parts they really want, or have they simply fallen prey to Deen’s good looks and own alleged nonchalance regarding Hollywood that they lap it up hook, line and sinker? It looks like the latter to me, but it also looks as if Deen is once again cleverly having his media cake and eating it, too, by engaging in the typical brat persona in full bloom while also proclaiming his disdain for it, in the process taking starry eyed reporters along for the ride.