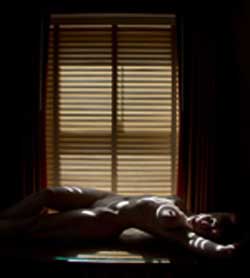 LOS ANGELES – I did not ask for permission to use David Levingston’s photo of a girl in repose in front of a window, but I assume he is okay with it and may even appreciate the fact that a co-plaintiff who also refuses to knowingly trigger 2257 feels comfortable using one of his many exquisite creations. Like some of my fellow plaintiffs, I believe, experiencing this trial has only deepened my appreciation of what is at stake in it and my sense of pride at having been a part of it. Much of that sensation, maybe most of it, has been derived from sitting and hearing the testimony of my fellow plaintiffs; hearing much of it for the first time and meeting most of them also for the first time.

I’m also going to imclude here, if my cms will cooperate, another photo taken by David that he posted to his own website of the plaintiffs present during one of the trial days after court had adjourned and we adjourned to a restaurant bordering Independence Square. The picture shows me talking and gesticulating but believe me, for most of the time I was happy to sit, eat and listen to my fascinating colleagues, each of whom is a bonafide force of nature.

I have a lot to say in the aftermath of this trial, but I’m not sure if some of it is best left unsaid for the moment. I’ll decide that when the time comes, I guess. But besides the normal frustrations that come with all trials, and especially ones where there are a lot of plaintiffs, I have things to say about the government’s case, both in terms of substance and execution.I won’t be able to hold off on that for very long.

I also have a lot of catching up to do in terms of telling the story of my accident. I don’t have a clue if accidents of this caliber are of interest to anyone – the writing probably has something to say about that – but it doesn;t really matter. No one’s coming to the site right now anyway. If the goal of writing is to not care who reads but that single ideal reader inside, as Updike put it, well, I could not be more situated for success.