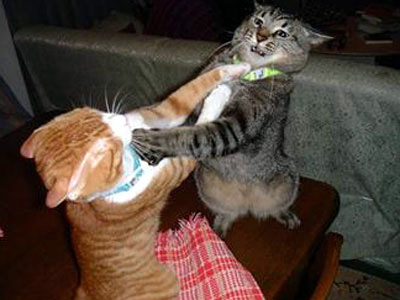 AKRON, Ohio – The economy is rough on everyone. The current financial crunch has even exotic dancers erupting into catfights over what little disposable income remains in the pockets of red-blooded American males.

On Friday night, the competition got to be too much for one woman, who attacked a new coworker on the latter’s first day on the job.

According to a police report, the assailant used her stiletto-heeled shoe to inflict wounds requiring seven staples in the rookie stripper’s face. The attack occurred shortly after the newbie arrived in the basement dressing room at the cabaret where both women were employed.

“The other girls were upset she was there and said, ‘We don’t need any more dancers around here,’” Akron Police Lt. Rick Edwards told the Beacon Journal.

Adding insult to injury, the victim was a 52-year-old woman who turned to stripping with the help of a friend because she needed the extra money, according to Edwards. She left the emergency room before police arrived and declined to talk to detectives about the assault, he told the Beacon Journal.

The shoe-wielding alleged assailant is in her late 40s, according to the police report filed by emergency room workers.