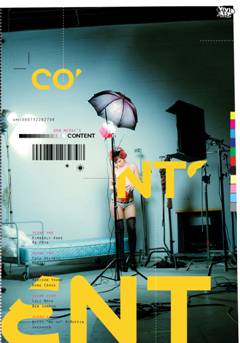 LOS ANGELES – Vivid-Alt director Eon McKai takes charge of changing technology and responds to the current economic downturn with his newest movie, Content. The award winning direct says it is the first adult film tailored to the needs of a country on the mend.

McKai unites the Vivid-Alt team with a stellar cast of alt-porn stars led by vixen Kimberly Kane in the new feature, which will be available in stores on July 29.

“The performers show us their ‘Recession Positions’ and give more of themselves than ever just to get through the rough ride. It was pretty much nuts,” says McKai.

Madison Young makes her debut in a McKai-directed movie with male performer Dane Cross.  Coco Velvet laughs as she shares a rough scene with Daniel while Cali Nova and Ben Jammin share a boy friend-girl friend moment.  Kitty “me-ow” McMuffin and Sherwood rock the set as a ‘crazy hot, off the hook’ couple.