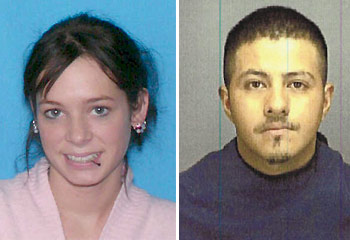 EL DORADO, Kan.- Israel Mireles, the man accused of killing 18-year-old Emily Sander, who worked secretly as an online adult performer under the name Zoey Zane, has been extradited from Mexico, where he fled after the slaying.

According to police, Sander and Mireles were seen leaving a bar in east El Dorado on November 23, 2007, tthe last time Sander was seen alive. Later, blood was discovered in Mireles’ motel room next door to an Italian restaurant where he worked as a waiter. The rental car Mireles was driving was found abandoned November 27.

Her body was found several days later nearly 50 miles from El Dorado. Searchers found the body after tracing the route they believed Mireles took to pick up his then-pregnant, 16-year-old girlfriend at her grandmother’s house in Baxter Springs before fleeing to Mexico. Authorities claim Mireles raped and killed the young woman after leaving a bar.

Mireles was arrested in Dec. 2007 in Melchor Muzquiz, Mexico, and fought his extradition. U.S. prosecutors had to agree not to seek the death penalty before Mexican authorities would allow the extradition. If convicted of capital murder, Mireles will face life in prison without the possibility of parole.

According to Wikipedia, “Friends of Sander said that she was recruited for an internet pornography site during the summer of 2007, shortly after her 18th birthday. She apparently kept her career mostly to herself, and only close friends knew about her pornography career, which was in addition to her work as a secretary.”

Previous post Tales of the New Economy: Chips for Sex