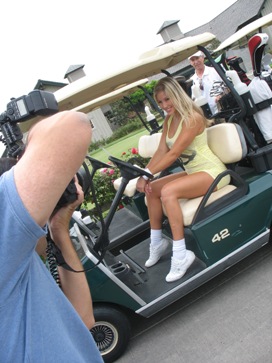 SIMI VALLEY, Calif. – What do you get when you take a few dozen scantily-clad adult starlets and let them loose on the links with foursomes and moresomes of good-natured golfers for a day of frivolity and charity fundraising?

organization founded by Motley Crüe frontman Vince Neil, in loving memory of his daughter that passed away from cancer in 1995. The Skylar Neil Foundation has donated millions of dollars in grants and awards, to fund research and breakthrough work in the areas of cancer, HIV/AIDS and other diseases.

Bloody Marys at 9:30 a.m. are a requirement, especially when you don’t usually roll out of bed until noon. But starlets that turned out for this year’s tourney were bright-eyed and bushy-tailed, and anxious to work the holes for a good cause. Vivid contract star Nikki Jane was the Princess of Putters; her caddy services were auctioned for $2,000 to one lucky group of golfers. Other adult ingénues included Lexi Love, Veronica Rayne, Dana Dearmond, Faye Reagan, Sinnamon Love, Kitten, and Heather Slaughter, as well as Hooter girls and Jagermeister babes in abundance.

Though this year’s turnout was a little light compared to previous years, undoubtedly due to the global economic meltdown, the golfers and girls that came out for the tourney stepped up to contribute their time and money. Many charities are notoriously shy to accept help from the adult industry; maybe one positive aspect of the financial fallout is the realization that adult money is as green as anyone else’s, and other nonprofits should take heed. Given the opportunity, adult industry members have big hearts, especially when it involves children or the less-fortunate, and they show up to donate and participate.

And props to TJ Martell Foundation, which helps organize the tournament every year – Lost Canyons Golf Club also deserves a hearty helping of kudos for being decidedly unstuffy and providing accommodations for a rockin’ event.