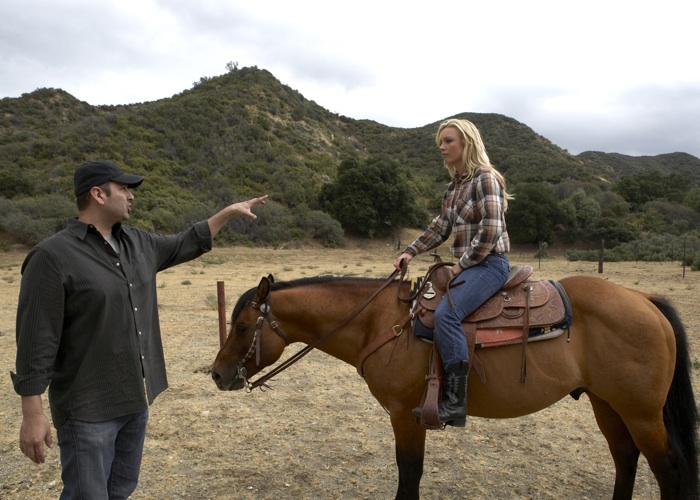 The production of Rawhide II: Dirty Deeds spanned 11 days in locations around Canyon Country. In addition to 10 sex scenes, Madness also directed the cast that included Kross, as well as Adam & Eve’s Bree Olson and other noted female and male performers, in gunfights and explosions.

Madness and Kross will be in the Playboy Radio studios on Wednesday, July 29, at 5 p.m. Pacific Time to discuss Rawhide II: Dirty Deeds with Christy Canyon and Nicki Hunter, the hosts of “Night Calls Radio.” Fans may also call 877-205-9796 to talk to the director and the Adam & Eve contract girl.

“Rawhide II: Dirty Deeds is more than just your regular scripted feature,” Madness said. “The fans at home will be treated and amazed to an action movie with automatic weapons and pyrotechnics. But there’s also the story between Tommy Gunn, a drifter, and Kayden, a ranch owner, that will appeal to the romantics out there. I’m very pleased with the shoot and I’m really looking forward to talking about it on ‘Night Calls.'”

Kross, a consistent favorite performer, was excited to be a part of the production. Her expectations for the project, penned by multiple award winner Nic Andrews, were exceeded under Madness’ direction.

“This is one of the most action packed features I’ve been a part of,” she said. “I’ve done many features in my career, but between the bullets, the explosions and the hot sex, Rawhide II: Dirty Deeds is the movie to watch in 2010.”