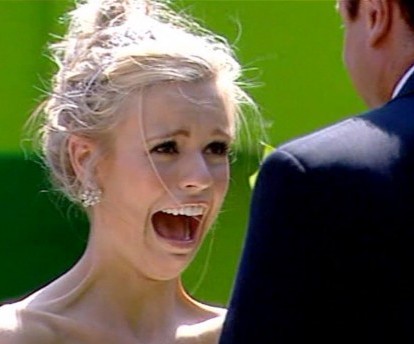 Adding insult to injury, the devious chap also failed to inform his bride-to-be about the extra-curricular activity; once she found out, the wedding was prompty cancelled.

“I don’t know if I will ever be able to trust a man again,” Haylie Hocking, 27, said, after learning that her beloved fiance, Jason Brake, 30, had a side gig performing in adult films. He told her he was a personal trainer, and that the weekend trips out of town were to train clients in a gym. (Not that far off the mark, actually.)

They met when Brake became a customer at the garage where Hocking worked. They started dating shortly after.

According to the Daily Telegraph, “She told a magazine she found he was a romantic, thoughtful and passionate lover and six months after meeting he moved into her flat in Bristol.” Two months later, he proposed and bought her a diamond ring.

As the wedding day approached, the bridesmaid searched the Internet for a male stripper to perform at the bride’s hen night, or bachelorette party, and discovered the groom’s secret. He was busted.

“There was no way I could marry an adult film star,” Hocking, a mechanic at the agarage, said. “I was unable to see beyond the dirty movie that had shattered my heart.”

For his part, fitness-buff Brake said that it’s all a big misunderstanding.