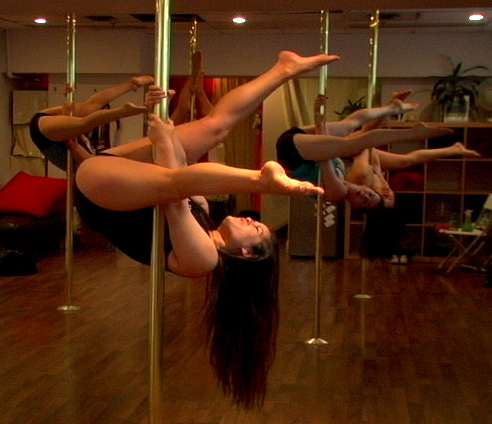 HOLLYWOOD, Calif. – Add actress Heather Graham to the growing phalanx of women who have joined the pole-dancing fan club.

Graham, one of the stars of Boogie Nights, appears as an exotic dancer in the new movie The Hangover. To prepare for her role, she took lessons in the art of stripping, but the classes weren’t her first brush with ecdysiastical ecstasy. She’s a regular in Sheila Kelley’s famous S Factor pole-dancing exercise classes.

Graham said the exercise — usually more associated with dollars in G-strings than anything else — is wonderfully empowering for women.

“I had taken this female empowerment class, and Sheila Kelley came in and talked about her classes,” she told WENN.com. “I had actually taken her classes because my friend taught one of them. She worked at the mayor’s office and quit her job to become a pole-dancing instructor.

“For this film I went back and took some refresher courses. It’s a dance class, but they teach you pole dancing moves and it reminded me how great [pole dancing] is…. It’s for any kind of woman; women of all different ages and sizes.”

Graham said in the classes she has attended, women put aside body issues and learn to enjoy doing something upon which they otherwise might frown.

“As a woman, [pole dancing is] inspiring, because any woman can feel sexy and you’re cheering each other on [in the classes],” she said. “You’re not doing it for like, ‘Oh, just give me a tip.’ Usually people wear shorts and a tank top or a bra and you just cheer each other on. You’re doing it to feel good about yourself and see other women feel good about themselves.”

Next post The Sword: New York on Top; Houston on Bottom