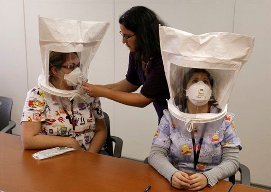 GENEVA – A global pandemic alert for swine flu has been issued by the World Health Organization (WHO), the seond highest warning it can make, indicating it believes a world outbreak of the disease is imminent.

A notice on the WHO website homepage says, “Based on assessment of all available information and following several expert consultations, Dr Margaret Chan, WHO’s Director-General raised the current level of influenza pandemic alert from phase 4 to 5.

“She stated that all countries should immediately activate their pandemic preparedness plans. At this stage, effective and essential measures include heightened surveillance, early detection and treatment of cases, and infection control in all health facilities.”

“This change to a higher phase of alert is a signal to governments, to ministries of health and other ministries, to the pharmaceutical industry and the business community that certain actions should now be undertaken with increased urgency, and at an accelerated pace,” Chan said in a prepared statement.

Confirmed human cases of swine flu have been detected in Mexico, the United States, Canada, Britain, Israel, New Zealand and Spain. Only Mexico and the U.S. have thus far reported deaths from the disease, though the 22-month old childwho succumbed to the disease in a Houston hospital was a Mexican national who had reportedly contracted the flu in Mexico and then traveled to the States for a family vacation.

According to the AP, the boy arrived in the border city of Brownsville with health issues April 4 and developed flu symptoms four days later, the Texas Department of State Health Services said. He was taken to a Brownsville hospital April 13 and transferred the following day to Texas Children’s Hospital in Houston, where he died Monday night.

There have been conflicting reports about the number of deaths attributable to the disease. While Mexico has reported over 150 deaths and climbing, Vivienne Allan, a member of WHO’s patient safety program, told ABC Radio Wednesday that only 7 deaths were caused by the swine flu, and not the higher number.

She added that WHO has thus far confirmed 40 cases of swine flu in the Americas, 26 in Mexico, six in Canada, two in Spain, two in Britain and three in New Zealand.