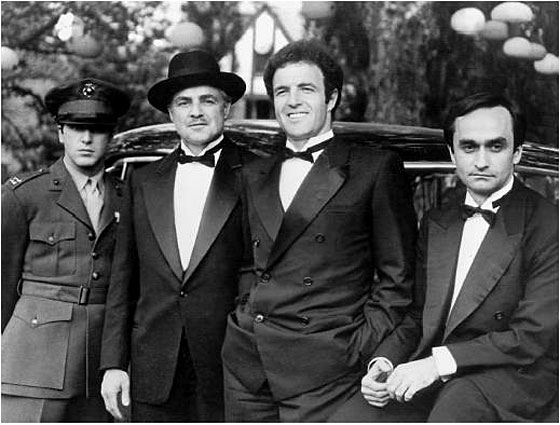 GUIDO VALLEY, Calif.—It may be obvious to some of our readers—assuming we have readers—that the principals of Daily Babylon have worked in the adult entertainment industry for several years. We have many other interests, to be sure, but for more years than we care to mention we have written about the industry for adult media outlets such as Adult Video News, XBIZ and YNOT.

I myself have had a most interesting journey, to be sure; one that doesn’t appear to be coming to an end anytime soon. Lately, I’ve been feeling very much like Michael Corleone when he uttered his pathetic complaint, “Just when I thought I was out… they pull me back in.”

Yes, that pretty much sums up how I feel, though the solution to my situation is far more complicated than simply getting out.

About a month ago, I was summoned to the offices of AVN for a meeting with the company’s president. He wanted to see what I was up to and whether I was still involved with XBIZ, where I had gone to work as the publisher about three years earlier. He knew, of course, that my connection with XBIZ was now tenuous at best, but I try to fly under the radar as much as possible and, really, who knows what someone is up to these days. Employment has become more nebulous than it used to be.

In fact, I was almost completely severed from XBIZ and looking out side the official confines of adult. Daily Babylon was finding its voice—if not its money—and we had learned a lot about how to make money online. Indeed, that was in great measure what we’d been writing about for the past decade—how to succeed in a viciously competitive online environment. I felt as if we had the wind at our backs.

The truth of the matter, however, was that the daily requirements to raise a family (wife, son, dog, cat) were so incessant and income so fleeting that taking the time to make DB into a viable “business” took on a lower priority as 2009 marched by. Each freelance writing gig—and thankfully those kept coming—paid less and less and came less frequently than in the past. The cold truth of adult publishing was that it was no different from its mainstream counterparts. A holocaust was being visited upon the model.

So when the offer came from AVN to rejoin the editorial staff as senior editor covering the online beat, I beat back my hesitation and took the gig. I still had friends there, valued the power of the brand and the potential it still held and figured nine months without any heath insurance was long enough.

Now I go in every day to help a company that is struggling. The adult food chain is dry, from retailers to distributors to production companies, vendors and publishers. Pretty much everyone is 90-120 days late with payments, and that goes for payments to freelance writers. It’s still a recession and it does not appear to be getting any better.

I place most of the blame for that on the economy and the fact that people are spending less and have smaller margins on their credit cards, but there are other far more nefarious factors at play that could make a recovery—once people start spending again—problematic at best.
Some of the big boys in the business are playing very, very dirty, and using the tough times to strong-arm small production companies into either selling out or licensing their content to them for peanuts. No one is unaware but fear has gripped everyone and people are scared to talk about it for fear that retribution will be visited upon them.

The goal is to get the rights to as much content as possible and to establish de facto monopolies. These site already garner tremendous amounts of traffic, but they still feel vulnerable in a world in which even the largest companies can be competed against. As that sense of vulnerability continues to grow, their desperate tactics become ever more vile and merciless. As an industry attorney said to me recently, “It’s a bloodbath out there.”

I’m not going to name any names because we’re still doing our research and gathering our facts and witnesses so that when we do publish the truth about what is going on we will be on very sturdy ground. There will be hell to pay anyway, but my own experience tells me that staying silent in the face of this kind of ignorant behavior, in which the middle class of adult is being systematically destroyed, is tantamount to collusion.

So that’s all I wanted to write about today, as we work to fill the glass half full, and fuller. There are many exceptional and honest people in adult who see what is happening and speak out about it, but as we all know, the biggest crimes always take place in broad daylight, with the cameras rolling.

Previous post Now All the Brothers are Together Again