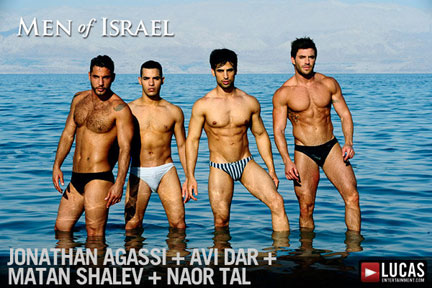 NEW YORK – Lucas Entertainment has wrapped production of Men of Israel, which the studio believes to be the first gay adult production with an all-Israeli cast filmed in Israel by an American studio.

Executive producer and co-director Michael Lucas and co-director-videographer mr. Pam were in the country for more than a month while scouting locations and shooting footage for the film. The exotic backdrops for many of the sex scenes range from the desert cliffs of the Dead Sea to ancient ruins near Jerusalem and avant-garde skyscraper condos in the metropolis of Tel Aviv.

“As both a director and a producer, Men of Israel is definitely the film I am most proud of,” Lucas said. “I firmly believe that it will bring awareness to all that Israel has to offer and will bring thousands of gay tourists to numerous beaches, resorts and other similar destinations. Based on all the press we have received from the Israeli media, this movie will be a milestone for the country. It’s amazing to see all the anticipation this project has created both in the United States and abroad.”

Added mr. Pam, “Shooting Men of Israel was no doubt one of the greatest challenges of my career. We worked relentlessly, and it was worth it. We found new ways to express ourselves and explored the boundaries of pornography and sexual freedom. The Israeli models captivated my camera with their chiseled, sun-kissed bodies, soulful eyes, and of course their pulsing hard cocks.

“I am truly thankful to Michael Lucas, our unbelievably hardworking crew, and especially the handsome and dedicated models who made our dream a reality,” she said.

Over the coming weeks, Lucas Entertainment plans to release a number of images, cast interviews and outtakes on the film’s new website, MenOfIsraelXXX.com (NSFW).

Scenes will be available to LucasEntertainment.com (NSFW) members beginning July 6, with a DVD release following on July 22. Lucas Entertainment also plans to release a volume of its popular Auditions line using additional scenes from the project. That DVD is slated for release Sept. 4.