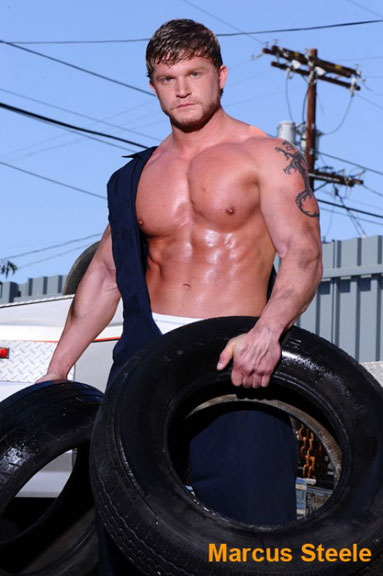 LOS ANGELES – Even the baddest bad guys are good at something, and Jet Set Men sets out to prove that in Carjackers, a Chris Steele-John Tegan film the studio wrapped in late June.

With the tagline “They’ve got you by the balls. They’re not letting go,” Carjackers stars Jet Set exclusives Marcus Steele, Hayden Stephens, Berke Banks and Dex Royal as four nasty repo men who decide making piles of cash in a bad economy isn’t enough. They also want to get laid in the process, and they’re not shy or gentle about forcing their desperate victims (D.J. Turner, Josh Griffin, Dayton O’Connor and newcomer Landon Mycles) to hand over sexual favors in order to reclaim their vehicles.

“Every scene in this movie is hot, rough and nasty, but the scene with Hayden Stephens and Landon Mycles will blow you the fuck away and make both guys instant stars,” he said.

The studio expects to release Carjackers in the fall, just after Steele’s Tackle hits the shelves in time for football season.