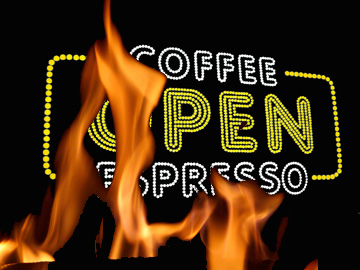 VASSALBORO, Maine – A topless coffee shop that has been at the center of a local controversy pitting community morality against economic prosperity was destroyed by fire early Wednesday.

State fire investigators said the blaze that destroyed the Grand View Topless Coffee Shop was set intentionally. An arson investigation is underway, although investigators said they consider doubtful the accusation that the owner set the fire himself: The structure, formerly an abandoned motel into which Donald Crabtree sank $277,000 for the property and renovations, was not insured.

No one was injured in the fire, which began just before 1 a.m., hours after Crabtree met with local officials to discuss turning the coffee shop into something resembling a more traditional gentlemen’s cabaret. To the mix of topless waiters and waitresses serving coffee and doughnuts, Crabtree wanted to add a DJ, expand the facility’s parking and extend the hours of operation.

Although the destruction of the cafe and the motel rooms-cum-apartments in which Crabtree and six others lived was a blow, Crabtree said he is determined not to give up on providing Vassalboro with a viable source of jobs and tax revenues.

“I’ll keep going,” he told The Associated Press. “I’ve got some girls out of work, and I’m going to do all I can to get back in there.”

The Grand View opened Feb. 23 after seemingly endless hearings about whether the city could deny the business a permit on some grounds other than failure to adhere to local laws. Vassalboro has no adult entertainment ordinances, an oversight Crabtree sought to use to his advantage once the deficiency was discovered.

Soon after opening the Grand View, he began planning to open a 300-seat modified strip club. City fathers sprang into immediate action, drafting an ordinance to prohibit any form of adult entertainment within the city’s boundaries. Although some outspoken local residents stood firmly on the town’s side in the matter, the Constitution did not. Consequently, the draft ordinance underwent several revisions and now specifies where, when and how such adult businesses may operate.

The ordinance faces a final vote during the town’s annual meeting on June 8. Although the Grand View would have been grandfathered under the new ordinance, it is not clear if the business will be allowed to rise from the ashes should the proposed ordinance pass.

The town’s 4,200 residents were mixed in their reaction to the coffee shop’s demise.