Freshman of the Year Finalists Announced 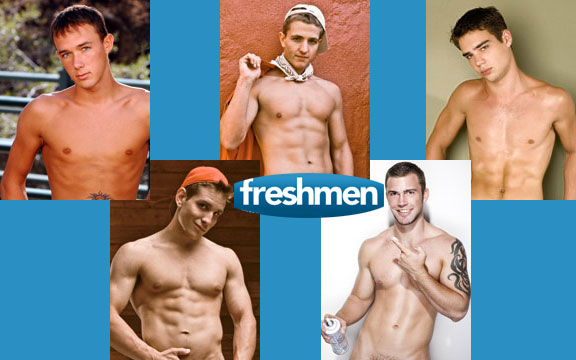 LOS ANGELES – Freshmen magazine has unveiled the top five finalists in its 14th annual Freshman of the Year contest. The ultimate winner will appear on the magazine’s September cover, scheduled to his the stands Aug. 18.

Cummings, who appeared on Freshmen’s cover in November 2008, is a singer and dancer who has worked for Falcon Studios, Channel 1 Releasing and Hot House Entertainment. Davis, the January 2009 cover boy, has worked for RandyBlue.com and Falcon. Mojo and McLovin, both of whom were Next Door Studios exclusives before moving to Jet Set Men, adorned Freshmen’s June 2008 and September 2008 covers, respectively.

Randall is a returning contestant, having been named Freshman of the Year in 2007. Currently he performs for SaggerzSkaterz.com.

“The Freshman of the Year issue is an exciting star-making opportunity for the model who’s had the biggest impact on our readers over the past 12 months,” said Managing Editor Winston Gieseke. “This year the race has been closer than ever before. The competition has been unusually fierce because each one of the five finalists has genuine star potential.”

Freshmen (NSFW) and MenMachine are part of the Unzipped Media network, which offers an affiliate program at GayRevShare.com (NSFW).