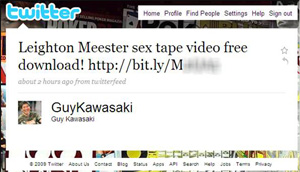 “Somehow, the Twitter account of noted venture capitalist Guy Kawasaki was compromised and a malicious tweet was posted,” Rik Ferguson wrote Wednesday on Trend Micro’s Countermeasures blog. “It came with a link that claimed to connect to a free download of the latest Hollywood sex tape, one belonging to the actress from the TV series ‘Gossip Girl,’ Leighton Meester. While the tape may be real and quite timely, the link wasn’t, as after making the user jump through a few hoops, he/she ends up being asked to download … what else but a malicious file.”

Clicking any button on the site to which the user is redirected automatically downloads a disk image file that infects both Mac and Windows operating systems with a Trojan horse, Ferguson noted.

“In this case, following the link would be a Very Bad Idea, because it will lead you to a malicious website designed to infect both Macs and PCs with a DNS-changing Trojan which at the time of [this] writing has low-to non-existent detection rates by security vendors,” Ferguson wrote.

Late Wednesday evening, Kawasaki denied his Twitter account had been hacked. Instead, he averred, the malicious tweet came from a feed to which he subscribes and which automatically posts to his Twitter account. The service providing the feed, NowPublic, aggregates user-generated news links.

Michael Tippett, co-founder of NowPublic, told The Wall Street Journal the auto-post feed to which Kawasaki subscribed is un-moderated, unlike most others offered by the service.

Ferguson was particularly alarmed by that bit of information.

“That’s fine for Mr. Kawasaki’s personal peace of mind, but you have to ask yourself: With that many followers, is it sensible to auto-post un-moderated feed content?” he wondered on Countermeasures. “Is this going to happen again, with a more believable tweet?”