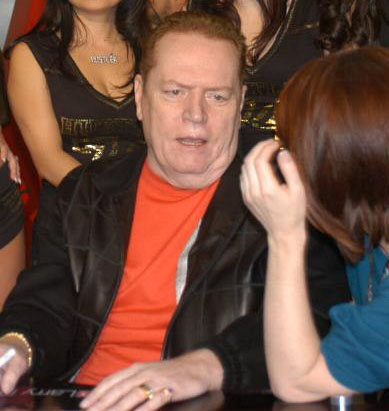 BUFFALO, N.Y. – The Buffalo News reports that Larry Flynt, the founder of Hustler magazine and the LFP empire it spawned, ‘hustled’ into town Saturday—as though under cover of darkness—to attend a party at the home of his longtime attorney, confidant and friend Paul Cambria.

Cambria’s firm, Lipsitz Green Scime Cambria LLP, is based in Buffalo but also has offices in Los Angeles.

“Flynt and his wife, Liz, were two of the more than 100 people who attended the Saturday night party in the home of Cambria and his wife, Paula, in the Spaulding Lake neighborhood,” the paper reports.

The fete was reportedly attended by “judges, public officials, high-powered attorneys and some big shots from the Buffalo media, but it was Flynt who drew the most attention.” (Which also explains why the hometown paper neglected to name any of those other “high-powered” attendees. Would you want to have to answer those phone calls first thing Monday morning?)

According to the Buffalo News, Flynt, who has been wheelchair bound since 1978 when he was shot by a white supremecist outside a Georgia courthouse with Cambria at his side, traveled all the way from his home in Beverly Hills to upstate New York because of his deep and longstanding respect for the attorney who has worked so many high-profile cases and is known for his commanding presence in the courtroom and gruff style in general.

“I made the pilgrimage out here hoping that Paul won’t raise my retainer fee,” Flynt said. “Actually, in my opinion, Paul is the best First Amendment lawyer in the country.”

The respect is mutual. Cambria told the paper that he “holds Flynt in such high regard that he built a special wheelchair-accessible room for him to stay in when he visits,” and that he has put “everything he has” on the line numerous times to fight on behalf of free speech, and spoke succinctly and movingly about what it was like to be there during his friend’s life-changing event.

“I rode with him in the ambulance to the hospital,” Cambria recalled. “It was bad. I didn’t think he would make it.”