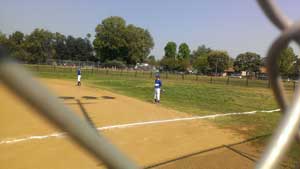 SHERMAN, OAKS, Calif.—The Studio City Recreation Center Dodgers ended their winning season with a solid 8-2 victory today, gathering afterwards for a shady lunch as trophies were handed out by the coach, who had something special to say about every player as he handed them their aptly named trophy.

Philip, who has spent most of the season staring into space, was the exceptionally well-deserved recipient of the Most Improved trophy. His two hit performance today, including his first RBI after having gone hitless all seaon, underscored the validity of the award. It was the same for each player, male or female.

These teeny person leagues that ask 8-9 year olds to hit a pitched ball and play the game the way it’s supposed to be played (more or less) are no walk in the park. At the very least, they are where difficult feats requiring sophisticated coordination are

handwrought into the soft clay of their gangly bodies.

For Philip, who confided to me as he sat back down at the picnic table, his gleaming trophy of a batter at stance tight in his arms, that he really didn’t think he was going to get one, the two hits were great to finally have under his belt, (for him and us), but getting the trophy really made him happy. It’s the first one he’s ever gotten, he earned it in a big way that all of his teammates acknowledged, and he made sure to put it in a special place on the dresser in his room before jumping back onto the Xbox.