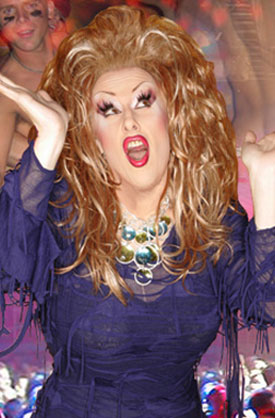 LOS ANGELES – Chi Chi LaRue and the men of Club Channel 1 plan several appearances around the U.S. during the summer months. The “sweaty summer tour” kicks off July 18 in Seattle and is expected to end Sept. 4 in New Orleans.

In Seattle, LaRue, Sister Roma, Jason Sechrest and Josh Griffin will join the fun at the Annual Grants Party, OZ. Presented by the Sisters of Perpetual Indulgence, the shindig will occur at the Abbey of St. Joan.

Channel 1 Releasing will kick off the Taken Tour Aug. 1 with a trip to Club Bliss in Salt Lake City. LaRue and the cast of Taken: To the Lowest Level also plan to appear in a number of other as-yet-to-be-determined cities, but the Aug. 1 date is special for C1R exclusive Blake Riley, because it will be his last personal appearance before he leaves the gay adult industry.

“I’m really looking forward to this upcoming appearance,” Riley said. “I want a chance to say farewell to my fans in person. I’ve had such a great run in the industry and learned a lot, but I’m ready to move on to the next step in my life, return to school and focus on me.

“There’s been a lot of speculation that I’m taking a break because of my relationship [with my boyfriend], but the truth is I’m just ready to do something else for a while,” he added. “I’m definitely going out happy, and when I’m ready to come back, I know I’ll have a home waiting for me back at Channel 1.”

LaRue will return to Los Angeles Aug. 15 to DJ a very special birthday party for promoter and friend Paul Nicholls. The soiree will take place at Here Lounge in West Hollywood, Calif.

Then on Sept. 3 and 4, LaRue will reign over the festivities at Southern Decadence 2009 as “the Diva of Decadence.” As part of her official duties, LaRue also will act as DJ and hostess at the Bourbon Pub & Parade. The fun will begin with the Big Dick Contest and Official Kickoff Event on Thursday, followed by a dance party in the French Quarter on Friday.

For more information about the events and schedule additions, visit the calendar at C1R.com (NSFW).