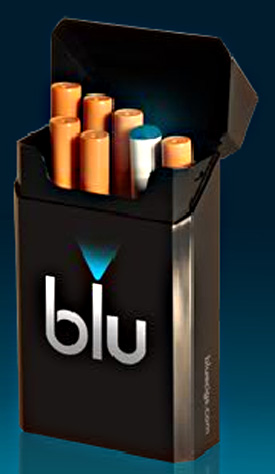 CHARLOTTE, NC – Apparently having exhausted the supply of naked people and scandalous discourse in the now-infamous Eric Dane/Rebecca Gayheart sex tape, Gawker.com has turned its considerable snark to inanimate objects.

And that has turned out to be … well, some sort of “non-event” for electronic cigarette developer blu Cigs,

a subsidiary of an adult entertainment company. Blu Cigs distributed a press release Monday in what the company’s president claimed was an attempt not only to protect Dane’s and Gayheart’s privacy, but also to discourage attention by the press.

Seriously: blu Cigs issued a press release to tell the media to pay no attention to blu Cigs.

After hinting a bong may inhabit a table seen briefly at minute 2:54 of the tape, Gawker scribe Brian Moylan points out a glowing, smokeless cigarette enjoyed by both Gayheart and the third member of the naughty triangle, Kari Anne Peniche.

“More suspicious [than the possible bong] is the cigarette that Gayheart and Peniche are smoking starting about 1:25,” Moylen notes. “They both hold onto it for quite a bit of time, but no smoke is coming off it and it doesn’t appear to [be] getting even smaller. Also, the tip seems to be glowing blue. Is it just not lit, or is it a ‘magic cigarette?’ Or maybe it’s one of these?”

The words “one of these” are linked to the homepage of blu Cigs.

Blu Cigs president Jason Healy isn’t talking, and he makes that point quite clear in the press release he said he distributed in order to refuse to confirm—though not necessarily deny—the mystery smoke was his company’s product.

“Our client records are confidential,” Healy said in the release. “We respect the privacy of all our clients, not only high-profile ones.”

In some circles, that might be seen as a left-handed confirmation.

In much less of an apparent attempt to say something without saying anything, Healy noted Gawker’s suggestion precipitated “a surge of inquiries” about blu Cigs, which he said “are known for the distinctive blue light that glows when the cigarette is drawn on. They have become popular with smokers in the film, television and music industries as they can be used in indoor no-(tobacco)-smoking environments such as sound stages and recording studios. There is no ash, and the vapor emitted won’t bother non-smokers and will not harm sensitive equipment.

“With current and stricter new restrictions coming on the use of traditional cigarettes, blu Cigs provide smokers with a better alternative cigarette experience without the bothersome secondhand smoke.”

Healy also said—in a press release—that his company has been attempting to keep a low profile where the media is concerned.

“Blu has only been on the market for a few months, but the demand has been so overwhelming that we’ve really been trying to stay out of the news,” he said, presumably speaking to the very news writers he has been trying to avoid.

“While I’m not saying [the cigarette in the Dane/Gayheart sex tape] is our product, it would’ve been better for us, if not Ms. Gayheart and Mr. Dane as well, if this tape hadn’t come out.”

But, since it did, blu Cigs will suffer and rake in the dough—while, of course, not in any way attempting to attract the spotlight.